Quantifying The Impact Of Recession On Consumer Behavior

A new study from BIGresearch suggests that nine out of 10 consumers say that the current economic crisis is affecting their lifestyles and will do so over the next five years, with more than half of those surveyed saying that they will consider each purchase more carefully or will be more conscious about price. More than 46 percent say that they will be sticking more carefully to a budget, and more than 43 percent say that they plan to avoid large credit card debt.

While more than 49 percent of those surveyed believe that the economy will rebound to previous levels, 21 percent say that it will not and 28 percent say they remain uncertain.

“Marketers will need to understand that this ‘new’ consumer is one that focuses more on needs over wants, purchase price and an increased level of personal savings,” said Gary Drenik, President & CEO of BIGresearch.

KC's View: Needs over wants. Focusing more on personal responsibility. And close to half of consumers have little or no faith in the economy’s ability to rebound.

Drenik is right. Attention must be paid, in the words of Arthur Miller.

A cafe in Portland is asking diners to name the price 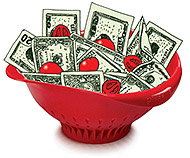 More from Rob Walker at his blog,murketing.com/journal

Not so long ago, consumers demanding superior design, eco-friendly products, organic food and the like were hailed as harbingers of a new 21st-century spending savvy. This explained why retailers like Whole Foods and Target were thriving. And it created a great environment for clever, virtuous little companies like Recycline: its Preserve line of colorful kitchen and bathroom products made entirely from recycled plastic synched up perfectly with the wishes of this powerful consumer tribe. Accordingly, Preserve sales, selection and distribution grew steadily.

Today, of course, savvy is measured in pennies pinched — or at least, that’s the consensus of many trend observers (who seem to have forgotten the earlier assessment). Organic-food sales are suffering. Some people are flat-out bragging about shunning cool design. And both Target and Whole Foods, which happen to be Preserve’s biggest retail distributors, are struggling. So what does this new environment mean for a brand like Preserve? Its products aren’t terribly expensive — $2 for a toothbrush, $6 for a set of tumblers, $10 for a cutting board. But shoppers who value frugal over eco can clearly find cheaper alternatives.

A couple of recent surveys assert that eco-chic lives on, but these are based on polling, not on sales data, meaning that at best they reflect intent rather than behavior. And at least one analysis, by the retail-consulting firm Mintel, comes to the opposite conclusion, asserting that after sharp increases in 2007 and 2008, consumer interest in buying green is sputtering. The higher cost associated with such products was cited as a chief stumbling block.

Results are sure to vary greatly among specific companies that have yoked their brands to some kind of ethical-consumption image. In the case of Preserve, Eric Hudson, the founder and C.E.O., points to sales data from 2008. At Whole Foods, he says, Preserve sales were up double digits, despite that chain’s relatively tough year. And although the economy’s prognosis seems to get gloomier every week, he says that Preserve is sticking with its forecast of more growth this year.

As it happens, the 16-person company’s particular business model actually benefits from at least one dimension of the downturn. Demand for plastics and other materials gathered through recycling programs has plummeted, making it much cheaper to acquire the stuff to make Preserve products. “That’s a good thing for us from an economics standpoint,” Hudson says. (Although, he quickly adds, it’s not so good in other ways: he doesn’t want suppliers to go under, and he worries that some consumers may interpret reports about the glut as a reason not to recycle.)

A more provocative argument is that product makers with a unique story to tell — and clear values to sell — have some advantages right now precisely because retailers are looking for something to attract customer attention besides the lowest price. An example of this in the marketplace is a Preserve-Whole Foods scheme called Gimme 5: stations set up in some locations of the grocery chain invite shoppers to dump their No. 5 polypropylene plastics, which are then collected by Preserve and converted into products. This theoretically gives people another reason to visit Whole Foods (especially in areas where this particular type of plastic isn’t accepted in municipal recycling programs). It also promotes Organic Valley, Stonyfield Farm and Brita (all of which sell products packaged in or made from this sort of plastic and sold at Whole Foods). And it in effect plants a conspicuous Preserve promotion near the entrance to each participating store. This, Hudson argues, offers “that kind of ‘wow’ that you’re looking for, to make a difference in a down economy.” That’s why retailers, packaged-goods companies and design shops are still “clamoring to partner with fast-growing green stories like we have,” Hudson says. “We still have more opportunities than we can possibly fulfill.”

All of which assumes that consumers will clamor for the results of such efforts — not despite the economy but because of it. Hudson and firms like his are hoping shoppers will ask themselves, “How can I feel really good about the 5 things I’m going to buy in the store today versus the 25 that I used to buy seven months ago?” That’s a pleasant thought, and it’s encouraging to hear that companies are still making such bets. Whether they pay off, of course, is up to the rest of us.

This in from Morning News Beat:

To paraphrase an old saying for the 21st century…

“Those whom the gods wish to destroy they first make complacent.”

The Rochester Democrat and Chronicle reported this week that when “Slumdog Millionaire” won its Best Picture Oscar last Sunday, it became the first film ever to win that Academy Award that was not shot on Kodak-made film.

“Slumdog Millionaire” was actually shot digitally – not on film at all – on equipment made by a Schenectady company.

Now, like every Best Picture winner since “Wings” won in 1928, the other four best picture nominees were shot on Kodak film.

(Thanks, by the way, to the MNB user who pointed this story out to me.)

It may not seem like a big deal, but shifts like these mean something…and reflect changes that will take place up and down the line.

For example, the Ithaca Journal reports today that Tops Friendly Markets will no longer accept film or one-time use film cameras for developing. It is getting out of the film processing business.

One of the reasons it is doing so is that its film processor is going out of business.

But it is also because there has been a shift…and these kinds of shifts mean something.

Another example, from another industry…

It has been announced that when the Rocky Mountain News publishes today, it will be the final edition of the 150-year-old paper, which is being shut down by owner Scripps Howard. It is the largest circulation daily to close down in an environment where people are simply getting their information from other sources.

Earlier this week, Hearst Corp. said that the San Francisco Chronicle may face a similar fate. And other papers in places like Philadelphia and Minneapolis reportedly are in danger, and both the New York Times and Washington Post all are facing financial troubles.

A shift is taking place…and these kinds of shifts mean something.

“Those whom the gods wish to destroy they first make complacent.”

No person, no business, no industry is immune from such shifts.

We ignore them at our own risk.

Geez there are some classy Employers out there. I am sure there are some folks who try to rort the system but if you've just been laid off without cause and you still have to fight for unemployment benefits? Oyvey…